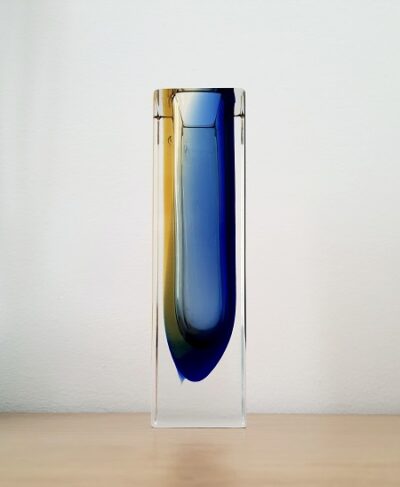 Blending ancient Roman experience with the skills learned from the Byzantine Empire and trade with the Orient, Venice became Europe’s elite glassmaking centre, peaking in popularity in the 15th and 16th centuries. The well-regulated industry created a wealthy merchant class and spurred technological innovation that included the invention of eyeglasses in the 13th century and crystal in 1450. Through the ages until today, Venetian glassmaking has also helped to establish demand for art glass.

The origins of glassmaking in Venice go back to the Roman times. Glass vessels dating from that era have been excavated across the Veneto and some incorporate classic techniques now associated with Venetian glass. With the earliest glass furnaces on a Venetian island dating from the 8th century, Venetians are well documented as skilled bottle-makers and mosaicists in the Middle Ages. By the late 1200s, the industry began to be regulated by the glassmakers’ guild.

In 1291, by the decree of the Venetian Republic’s Great Council, all glassmaking furnaces were moved to the nearby island Murano to eliminate the risk of fire spreading from them onto the mostly wooden structures of overpopulated Venice. The move established Murano as a premier glass-manufacturing centre even if the true motive may have been to isolate the glass craftsmen to a location from where they wouldn’t be able to leave without permission and disclose trade secrets.

Venice’s location between East and West gave it a monopoly in manufacturing and selling quality glass throughout Europe that lasted for centuries. The industry peaked in the 15th and 16th centuries. By then, Angelo Barovier discovered the process for producing clear glass (cristallo) that made Murano glassmakers the sole producers of mirrors in Europe. At the same time, the popularity of Chinese porcelain among European nobility fuelled discovery of the white glass (lattimo).

From the 17th century, Venice faced competition from new glassmakers in Europe. The industry shrunk with Napoleon’s conquest of Venice in 1797 and his abolishment of all artistic guilds. The Austrian rule which incentivised domestic glassmakers in Bohemia further decimated furnaces in Murano. Only in the 20th century the industry reinvented itself towards the production of luxury items which art glass, glass jewellery and glass chandeliers, handmade in Murano, remain to this day.