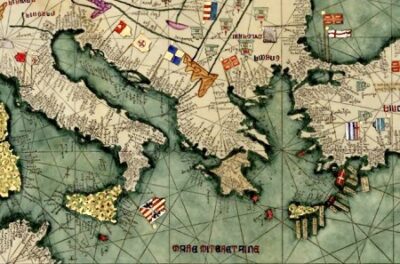 Venice’s original settlers abandoned the mainland of Italy and relocated to the islands of an Adriatic lagoon to evade barbarian invaders in the 5th and 6th centuries. The lagoon gave them protection and an opportunity to found an independent republic, unhindered by the instability ashore. Because of their defensive position, the Venetians were able to remain Roman. The collapse of the Western Roman Empire on the mainland made them naturally lean towards the remaining Eastern Empire.

The Lombard hordes whose incursions into northern Italy began in 568 AD drove great numbers of mainlanders onto the islands of the Venetian Lagoon, previously the home of itinerant fishermen and salt workers. These isolated communities – literally islands of Veneto-Byzantine civilization – became part of the exarchate of Ravenna when it was created in 584. When the mainland Byzantine city of Oderzo fell to the Lombards in 641, political authority moved to Torcello – one of the islands in the lagoon.

The Byzantine Emperor Justinian initially brought Venice under the rule of the Eastern Roman Empire. At first, the patriarchs of the coastal Aquileia claimed authority over the Venetian lagoon, but the invasions devastated local episcopal sees, leading to a vacuum. Aquileia eventually had two competing bishops, weakening the position, while the bishop of the inland Altino moved to Torcello in 647. In 775 an episcopal see was established on the Venetian island of Olivolo (later renamed Castello).

Like church relations, early Venetian politics was about pro- and anti-Byzantine factions with regular attempts by various clergymen to exert temporal influence. Venice’s first historically known doge, Orso Ipato, was elected in an anti-Byzantine military declaration in 727, but he was succeeded by Byzantine officials until Obelerio degli Antenori, Venice’s seventh historical doge, placed the republic under the authority of Charlemagne’s son Pepin of Italy to free it from Byzantine control.

Though the Franco-Byzantine Treaty of 814 granted Venice political independence from the rule of the Western Empire, it did not confirm any effective dependence on the Byzantine Empire. As a result, by the 840s the doge was already negotiating Venice’s international treaties in his own name. This unusual position of such a small but independent republic, situated in territorial isolation between two great empires, contributed greatly to Venice’s function as a middleman in international trade.