Venice and Milan: Rivals in war and peace 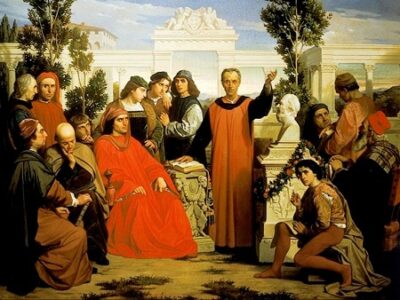 Venice and Milan: Rivals in war and peace

Venice’s expansion on the mainland of Italy in the first half of the 15th century led to four ruinous wars and a peace treaty with neighbours that established a regional balance of power built on diplomacy. These events transformed the political structure of Italy: out of a fragmented map of communes and city-states emerged the major territorial powers that included Venice and Milan/Lombardy that would survive, within their elastic borders, until Italian unification in the 19th century.

During the late Middle Ages, while the south of Italy was unified under the Kingdom of Naples, the north was divided amongst small states centred on mercantile cities. While these enjoyed independence and some democracy, they were in competition for territory, trade and power, so much so that the region was in a constant state of war. By the early 15th century, Venice was already a major sea power and control over the mainland routes became necessary for the safety of its trade.

Venice’s mainland expansion led to a clash with Milan whose territory already extended over much of northern Italy. Between 1423 and 1454 four devastating wars ensued, caused by Venice’s entry into the mainland power politics and involving the rest of Italy in shifting alliances. The counterweight in the balance was the allegiance of Florence, at first allied with Venice against encroachments by Milan, then switching to ally with Milan against the increasing territorial threat of Venice.

The wars ravaged the economy of Lombardy and weakened the power of Venice. They ended with the Treaty of Lodi in 1454 which established principles of non-aggression and ushered in four decades of peace. Power was now balanced among the five states to dominate Italy: Venice, Milan, Florence, Naples and the Papal States. This balance would only be upset by invasion by foreign powers with papal or imperial support as in the War of the League of Cambrai in the 16th century.

On the Venetian side, the wars against Milan were led by Francesco Foscari, its longest serving doge, and against the backdrop of the domestic scandal of the century. During the wars, Foscari’s son Jacopo stood three trials on charges of graft for accepting bribes in return for government appointments through his father and for conspiring with Venice’s arch-enemy, the Duke of Milan. Jacopo was twice exiled to Crete and the scandal inspired a play by Lord Byron and an opera by Giuseppe Verdi.