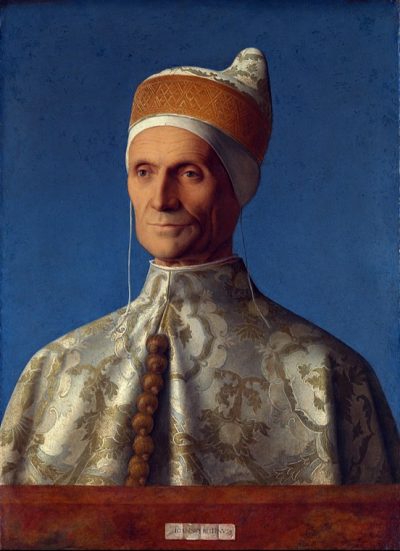 Giovanni Bellini‘s Portrait of Doge Leonardo Loredan, now at the National Gallery in London, is a masterful depiction of the ascetic and brutally focused man that Loredan needed to be in order to climb his way up the greasy pole of Venetian politics. At the same time, it is also an imposing portrayal of the doge’s office; a solid symbol of Venetian power and authority at the turn of the Cinquecento when Venice was arguably the richest city in the world, and – with some 180,000 inhabitants – the second largest city in Europe after Paris.

In the picture, which is dated 1501 – at the very start of Loredan’s twenty-year tenure as the Doge, and signed IOANNES BELLINVS on a cartellino affixed to a stone ledge in the front as was the ancient Roman tradition, the figure dons all the trappings of his office – a corno ducale – worn over a linen cap – and a ceremonial silk robe with ornate buttons. Along with the brocade robe, all of these accoutrements are reproduced with great fidelity by Bellini whose skill in rendering these sheeny fabrics is reminiscent of the realism of the Flemish painting of the time.

The subject of the painting – a secular portrait – cements the Renaissance shift away from medieval portraiture in which the Church was the dominant source of artistic inspiration and where devotional images abound. Harking back to antiquity rather than the Christian tradition, Bellini’s two-dimensional painting of the Doge is as deep in space as the Roman portrait busts Renaissance artists sought to emulate. Surprisingly for a secular portrait, the Doge is also not in profile, but face-on – a form that in medieval art was generally reserved for sacred portraiture.

The most spectacular aspect of the painting, in my view, is Bellini’s take on perspective. The picture places the Doge right before the viewer, separated only by the stone ledge he stands behind, and yet at the same time he is positioned against the backdrop of deep blue sky. This is an astonishing exercise in three-dimensional modelling, the effect of which Renaissance artists so strove to achieve. Bellini has clearly mastered it here: as you look on, you almost feel you could walk around the Doge and put your hand between the folds of his clothes.

Portraits are most compelling when they tell us something about the person portrayed. A good portrait is not just a visual representation of a person; it will also reveal something about the essence of that person. What the portrait reveals may not be completely obvious – sometimes it can be implied through a certain expression or pose, or the artist’s use of colour. Bellini’s Portrait of Doge Leonardo Loredan nails it on all of these scores: it is a picture of both a person and the institution he represents, and it captures the essence of Venice of the Doge’s time.