Venice on fire: A chance to reform and rebuild 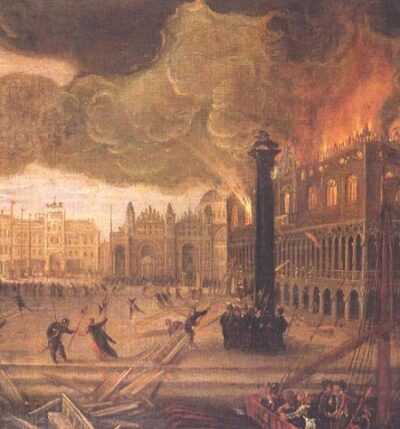 Venice on fire: A chance to reform and rebuild

Despite being surrounded by water, Venice has always feared fires. Wood isn’t only the bedrock of the city – the wooden piles that support its foundations have been likened to an inverted forest – it’s also what all buildings are made of on the inside. And they also stand dangerously close to each other. Nor are fires in Venice a thing of distant past. When the Teatro La Fenice burnt down (for the third time in its history) in 1996, helicopters took five hours to contain the enormous blaze.

In 1291, fearing fire and the destruction of the city’s then mostly wooden buildings, the Venetian government ordered glassmakers to move to the nearby island Murano. Since the furnaces used to make molten glass often caught fire, this safety measure has since removed much of the risk of a major fire disaster for the city. The move also kept Venice’s unique glassmaking technology – and the glassmakers who couldn’t leave without official permission – confined to Murano.

Based on the story of La Fenice, it often seems that the fire strikes thrice when it comes to Venice’s famous structures. In 1483, a fire broke out in the section of the Doge’s Palace overlooking the canal, where the Doge’s Apartments were. A reconstruction became necessary and a new structure was raised alongside the canal. The Venetian government took the fire disaster as an opportunity to introduce the new Renaissance language to the building’s existing Gothic architecture.

In 1547 another fire destroyed parts of the second floor, but fortunately without undermining the structure the Doge’s Palace as a whole. During reconstruction a third blaze, known as the Great Fire of 1577, destroyed much of the southern wing, including the Sala del Maggior Consiglio, together with artworks by Gentile da Fabriano, Guariento di Arpo, Alvise Vivarini, Vittore Carpaccio, Giovanni Bellini and Titian. During rebuilding, the original Gothic style was mostly preserved.

After the initial shock of each fire, it was decided that each structure would be rebuilt com’era, dov’era, meaning “how it was, where it was”. This principle would later be applied fully to St Mark’s Campanile which was rebuilt completely after it collapsed in 1902. In the case of the Doge’s Palace, each reconstruction would incorporate new Renaissance or Neoclassical elements into the Gothic original but an alternative design – by Andrea Palladio after the 1577 fire – was rejected.