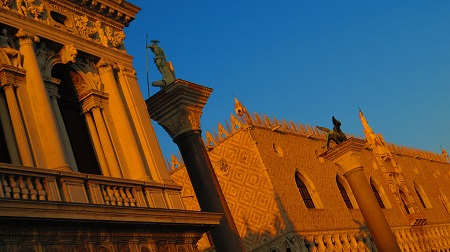 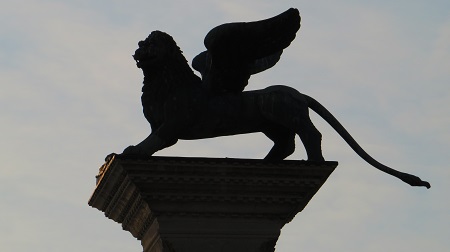 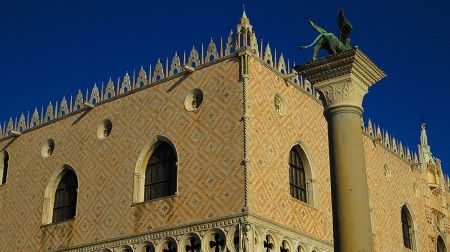 Long before modern transport from the mainland made possible a long trek on foot that now takes you straight to St Mark’s Square, the main drop-off point in Venice was from ships in front of the Piazzetta. One of the first things the water-borne visitors would see back then were Venice’s two magnificent stone columns: one holding a winged lion – the symbol of St Mark the Evangelist and the other topped with a statue of St Theodore, Venice’s first patron saint, standing over a dragon.

The two marble and granite Columns of San Marco and San Todaro, as they are known to Venetians, were brought from Constantinople in the 12th century as a gift from Byzantine emperor for their help in the Second Crusade or, more likely, as spoils of war. They were erected in the Piazzetta some decades after their arrival as the task turned out to be far more challenging than anticipated and despite the fact that the water was much closer to their present location then than it is now.

The logistics of the operation were assigned to local engineer Niccolo Barattieri who managed to transport the columns to land despite their enormous mass. For his feat, Barattieri was rewarded with the granting of exclusive rights to set up a gambling table between the two columns, an activity strictly prohibited elsewhere in the territory of the Republic of Venice. Henceforth gambling was allowed only in the space between the columns but the privilege ended with Barattieri’s death.

The original shipment from Constantinople apparently comprised three columns, one of which is still missing. Although it survived the long voyage, it reportedly rolled off the boat while being off-loaded in Venice. The muddy lagoon seems to have swallowed it and even the renewed, modern-day effort to locate it in 2016 was in vain. So little is known about the third column that its mere existence has become a legend. Most people who pass by the two columns are likely unaware of a third.

In the 18th century, the area between the columns became the site of public executions. Each death sentence would be read out by the doge standing in between the two pink columns on the balcony of the Doge’s Palace facing the Piazzetta. The condemned would face the Clock Tower to see the exact time of their death. This explains the local superstition of not passing between the two columns. Similarly, ‘trovarsi tra Marco e Todaro’ in the Venetian dialect means being in big trouble.