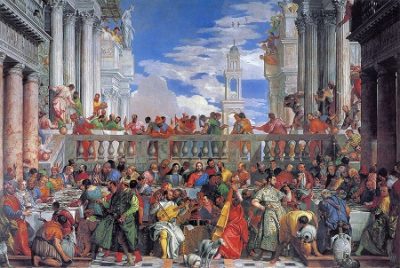 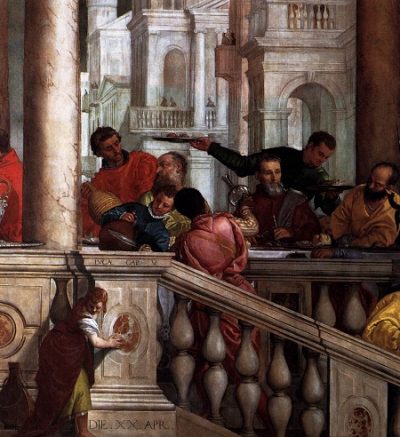 Paolo Veronese, Venice’s Mannerist master, is famous for combining biblical themes with sumptuous banquet scenes. One of them in particular, The Feast in the House of Levi, didn’t sit well with the Inquisition. The oversized painting is a crowded composition, in which groups of fashionably dressed Venetians reenact a religious event in the most secular way imaginable: this epic and comic masterpiece brings together Jesus and the apostles with various drunken gatecrashers who include a court jester.

It’s arguably one of the most ‘modern’ religious paintings of the Cinquecento, consisting of a complex mixture of the sacred and the profane, religious and secular, theatrical and mundane, European and Oriental. The biblical party unfolds in the grand style of Venetian high life within an opulent courtyard. The guests who include Jesus, the apostles and a host of questionable characters eat, drink and flirt while Veronese portrays himself Titian, Tintoretto and Jacopo Bassano as musicians entertaining the party.

One of the largest canvases of the period, measuring 5.5 by 13 metres, it was commissioned for the refectory of Palladio‘s monastery on the island of San Giorgio Maggiore in Venice. The artist’s fee was 324 ducats, plus board and lodging and a barrel of wine. Veronese completed the work in 15 months. The large-scale decorative painting gave him ample opportunity to appropriate the monumental Mannerism popular in Rome while demonstrating his virtuoso figure painting and use of Venetian colorito.

It’s clear that Veronese saw himself as an entertainer, but was he right to turn religion into entertainment? The Inquisition, the Catholic bureau of investigation charged with suppressing heresy, didn’t think so. It summoned him to answer awkward questions about his depiction of various impious buffoons and German soldiers and the notable absence of Virgin Mary. The hearing, preserved in an official transcript, reveals an alarming interrogation where heresy is mentioned but Veronese keeps his cool.

He was given three months to change his painting but Veronese only changed its original title of Marriage Feast at Cana where Jesus turns water into wine to The Feast in the House of Levi. The latter is still an episode from the Gospels, but less doctrinally central, and one in which the Bible specifies “sinners” as present. That was the end of it. The picture continues to entertain as Veronese intended. Napoleon briefly took it to Paris and on its return to Venice it was hung in the Accademia where it still remains.