Was Venice a democracy? 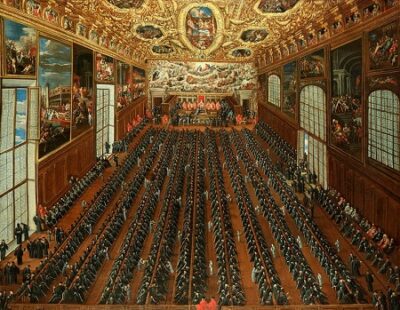 Was Venice a democracy?

During the so-called Dark Ages – between the fall of Roman empire and the Renaissance – the politics of Europe was monarchical, feudal, brutal and unfair. During this time, Venice flourished economically and intellectually, chiefly because it kept the best of Greek and Roman democratic traditions alive. The Republic of Venice had many democratic virtues: it was founded on equality, cherished free speech and it was able to collectively defend itself and prosper. Was it, however, a democracy?

The Most Serene Republic or La Serenissima, as Venice liked to style itself, was never a republic in the sense that all of its citizens could vote or take an active part in its governance. However, for centuries when most states were run by one person with almost unlimited power, Venice had a system of governance with checks and balances in which certain citizens exercised much more authority than in most other states at the time. By this definition, Venice had the longest history of any republican government.

Venice had a mixed government, combining monarchy in the Doge, elected aristocracy in the Senate and wider nobility in the Great Council. Though not a democracy, the Republic of Venice inspired ideas of accountable governance. There was balance of powers between the Great Council which elected the Doge in a very complicated manner and for life and with the elected Senate acting as parliament. Importantly, the Doge’s power was limited by an oath of office, much like a constitution.

In practice, Venetian politics were dominated by a powerful merchant class at whose apex were the old noble families. This made it an oligarchy – or government by the few – rather than an actual republic in which the common people would hold political power. Regardless, Venice’s place in the history of political institutions is notable for the rather revolutionary idea in medieval Europe that no one had given the Venetians their political rights – instead, they had created those rights for themselves.

In the final analysis, the Venetian oligarcho-democracy survived many feuds, attempted coups, plague epidemics, wars and schemes by foreign powers. In particular, Venice during its millennium of independence outlived every other Italian state despite its vulnerable geographic location and its lack of arable soil and a steady supply of potable water. Despite all that, Venice’s political system helped the Venetians to turn their circumstances to their advantage, become rich and successful, and outlast their many enemies.